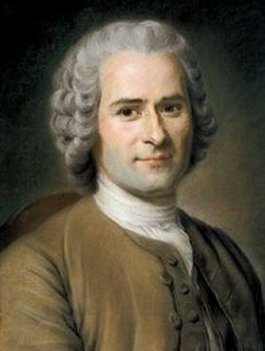 Jean Jacques Rousseau was an 18th century philosopher who later became known as a revolutionary philosopher on education and a forerunner of Romanticism. One of the most influential thinkers during the Enlightenment in 18th century Europe, his ideas concerning education and the role society plays in a child’s development/education was published in his famous work Emile, which caused some sparks to help light the French Revolution and eventually brought about his own exile from Paris.

Born at Geneva on June 28th, 1712, Rousseau’s ultimate belief was that people are born basically good, but are corrupted by society. He also thought that individuals only learn these “bad habits” by living in the city, which is why he preferred a rural setting for children to learn. He wanted to abandon society’s hypocrisy and pretentiousness. He believed that natural education promotes and encourages qualities such as happiness, spontaneity, and the inquisitiveness associated with childhood. He wanted children to be shielded from societal pressures and influences so that the natural tendencies of each child could emerge and grow without any unwarranted corruption.

Rousseau's greatest work was Émile, published in 1762. More a tract upon education with the appearance of a story than it is a novel, the book describes the ideal education which prepares Emile and Sophie for their eventual marriage. Book One deals with the infancy of the child. The underlying thesis of all Rousseau's writings stresses the natural goodness of man. It is society that corrupts and makes a man evil. Rousseau states that the tutor can only stand by at this period of the child's development, ensuring that the child does not acquire any bad habits. Rousseau condemned the practice of some mothers who sent their infants to a wet nurse. He believed it was essential for mothers to nurse their own children. This practice is consistent with natural law.

According to Rousseau’s Émile Book Two, the purpose of education consisted of the tutor preparing the child for no particular social institution, but to preserve the child from the baleful influence of society. Emile is educated away from city or town; living in the country close to nature should allow him to develop into a benevolent, good adult. The child learns by using his senses in direct experience. He lives in Spartan simplicity.

Book Three describes the intellectual education of Emile. Again, this education is based upon Emile's own nature. When he is ready to learn and is interested in language, geography, history and science, he will possess the inner direction necessary to learn. This learning would grow out of the child's activities. He will learn languages naturally through the normal conversational activity. Rousseau assumes that Emile's motivation leads to the purposive self-discipline necessary to acquire knowledge. Finally Emile is taught the trade of carpentry in order to prepare him for an occupation in life.

Book Four describes the social education and the religious education of Emile. The education of Sophie is considered and the book concludes with the marriage of Emile and Sophie. Emile is permitted to mingle with people in society at the age of 16. He is guided toward the desirable attitudes that lead to self-respect. Emile's earlier education protects him from the corrupting influence of society. The revelation and dogma of organized religion are unnecessary for man. The fundamental tenets of any religion affirm the existence of God and the immortality of the soul and these are known through the heart only. Having completed the explanation of Emile's ideal education, Rousseau turns his attention to the education of Sophie. Women are not educated as are men. The natural purpose of a woman is to please a man. She is expected to have and care for children, and to please, advise and console her husband whenever necessary. Her education does not extend beyond this purpose.

His views of monarchy and governmental institutions outraged the powers that be and his ideas on natural religion, unorthodox to both Catholics and Protestants, forced him to flee to Môtiers in Neuchâtel under the protection of Frederick the Great. There Rousseau studied botany and eventually accepted David Hume's invitation to settle in England where he wrote most of his autobiographical Confessions.

Rousseau’s philosophical ideas on the education of children were very risqué and created quite the uproar. His philosophy was also not gender neutral. Rousseau believed females were to be educated to be governed by their husbands. They were to be weak and passive, brought up in ignorance and meant to do housework. Males were to be educated to be self-governed, and the philosophies in Emile essentially only pertained to males in society. He believed that the private sphere depended on the naturalized subordination of women for both it and the public political sphere to function. Ironically, one of his main beliefs in Emile that would not have been scandalous in Rousseau’s day would clearly be seen as sexist in today’s society.

Rousseau's powerful influence on the European Romantic movement and after was due to his vision of a regenerated human nature. His philosophy revealed a striking combination of idealistic and realistic elements which constantly seemed to open the possibility of a better world. This optimistic outlook was transmitted through a particularly eloquent and persuasive style, rich in emotional and musical overtones, giving the impression of intense sincerity. Rousseau's great challenge was to convince the humblest of men that they should never feel ashamed to call themselves human beings.

Rousseau ultimately left the city of Paris live in the country. He had become completely disillusioned with the norms of society in the city, especially that of the monarchy, and had even become disgusted with his own friends. He felt that children more fully learned right and wrong by experiencing the consequences of their actions firsthand rather than being physically punished as most people in his day did. Rousseau firmly believed that nature is kind and man essentially is not; humans have the potential to be kind, but oftentimes choose not to.

Seeking shelter in a hospital, Rousseau eventually died insane in a cottage at Ermenonville, July 2, 1778, from a sudden attack of thrombosis, which aroused suspicions of suicide. He was buried there until 1794 when his remains were placed with Voltaire's in the Panthéon in Paris. 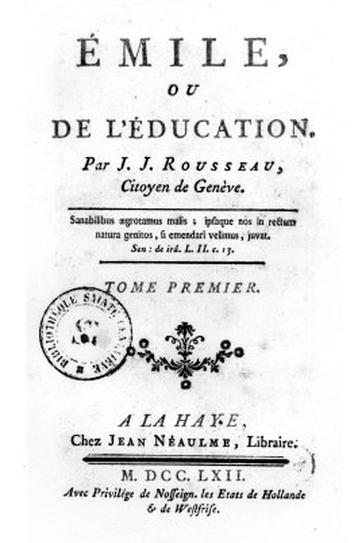